It was one year ago that Dustin and I went to Japan, and it’s a trip I still think about every single day. Japan was the most exciting three weeks of my life, and I’ve been waiting for the 1 year anniversary to revisit my journal from that time and share my experiences and special memories from Japan.

We boarded our flight to Narita from Calgary around 12:15! It was a big plane. I watched most of a Japanese movie about a Shogi player (“March of the Lion” or something?) but it was so sad T_T and I was too tired to finish it.

I tried to sleep several times with a variety of styles of inflatable travel pillows, but to no avail! We were served a lunch set at the beginning (ish) with noodles, potato salad, a hard and dry bun, mini water bottle, and a tasty brownie. Near the end of the trip, we got a dinner set of chicken or beef rice paired with a fruit cup.

When we were over land finally prior to landing, it was the most beautiful and varied aerial view I’ve ever seen from an airplane:

I spotted a large, tall statue (a Buddha?) a few minutes before we landed.

Flying around Canada gives aerial views of mostly flat, uniform land with systematically organized residential areas in perfect rows, but comparatively the aerial view of Japan reminded me of a circuit board- clusters and pathways that are interesting to behold, and that may seem random but surely have a meaningful organization of their own. 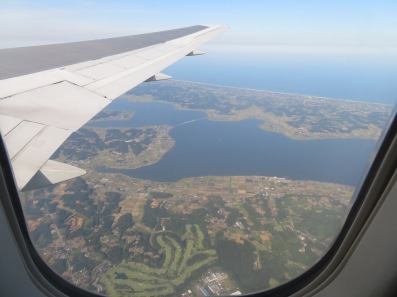 We landed and entered Narita airport, following the stream of other tourists and travelers until entering a large hall that was busy and a bit intimidating. Luckily, the information desks were immediately visible and a kind woman explained to us how to go where we needed to for exchanging our cash, getting our pocket Wifis from the airport bank, and submitting our JR orders for JR passes. 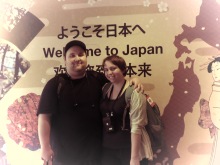 First we exchanged our CAD for yen. The exchange counter had cute little origami figures offered for visitors to take!

We narrowly avoided a HUGE lineup at the airport’s JR office (probably because we didn’t have any checked baggage to wait for after getting off the plane) but we did still have a decent time to wait. It was OK though, because they had air conditioning (THE HUMIDITY IS REAL) and lots of info displays and pamphlets to read while waiting.

The woman at the JR office booked our seats on the Narita Express and then we were on our way. We followed the signs to the train station and waited 20 mins. I got excited when I saw my first Japanese vending machines glowing in the underground passage and bought a couple of drinks! The Tsubu Tsubu Sangaria had yummy jellies in it. 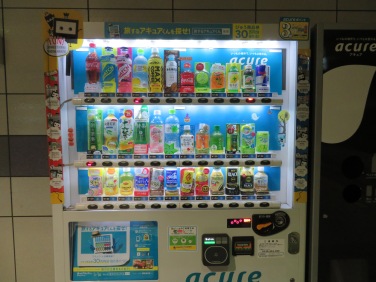 The Narita Express was clean, air conditioned, and had roomy seats. Dustin pointed out that after the attendant did his walk-around every few minutes, he would turn to face the passengers and bow.

As the Narita Express carried us to Tokyo Station, we couldn’t believe how cool the trees looked- lush and thick. We passed traditional looking houses and huge apartment complexes. We could see Tokyo Skytree for a moment and appreciate how MASSIVE it is. I got the willies just looking at it from afar.

At Tokyo Station we transferred onto the Yamanote line to go to Akihabara. By this point it was CRAZY RUSH HOUR. Holy crap. We were expecting it, but it was still overwhelming. The train to Akiba had cute commercials playing on the screens for Animal Crossing and Fire Emblem stuff!

When we got off in Akiba it was packed, and by this point we were exhausted. We took a couple of minutes figuring out which exit to take. I saw my first glimpse of the SEGA building on Akiba strip- there was a girl in cosplay advertising enthusiastically for something, and she had blue hair.

Finally, we found our first sanctuary: Hotel Washington Akihabara. We would be staying in Ikebukuro for a large portion of the trip, but for the first night we would stay here.

When I checked in at the desk the woman slid a tray to us with two rolled cloths on it. I was like… um… for hands? And she said yes. They were warm steamed towels. Nice!

Our hotel room is SO CUTE and provided unexpected amenities like plastic hairbrushes, toothbrushes, teensy toothpaste tubes, pyjamas, vacuum-sealed sponges, a razor, even cute little cotton slippers you can take home with you! 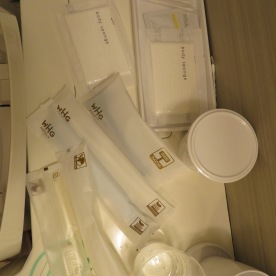 We showered and gladly went to bed right away. The window beside the bed offered a great view of the entrance to Akiba station and a busy intersection with a crosswalk.

Tomorrow’s post will be Japan Memories Day Two… EMBARRASSING MYSELF IN A KONBINI!!!

Mwah!
New lino cut 🍍
🖤
Interpretive dance, idk
My bestie @thornton.mikey created that black floral shirt himself. Talent! ✨
Listen to that sweet, cracking thunder and lightning, and the gloriously cool rain that comes with it 😌 finally

Mwah!
New lino cut 🍍
🖤
Interpretive dance, idk
My bestie @thornton.mikey created that black floral shirt himself. Talent! ✨
Listen to that sweet, cracking thunder and lightning, and the gloriously cool rain that comes with it 😌 finally
Loading Comments...
%d bloggers like this: