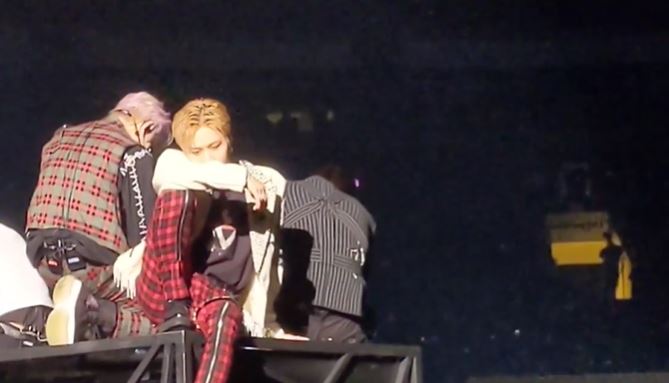 A couple of days ago I had a whirlwind trip to Vancouver to see SuperM- as a Shawol I wanted to support Taemin on his return to Canada while Key, Minho, and Onew are doing their mandatory military duty.

I was (and still am) fighting off a nasty cold, and my voice was completely gone the whole time I was in Vancouver, but the trip was still worth it!

I also got to debut my WIP jean jacket with SHINee Married To The Music on the back:

Originally I had booked my 2-night stay at the Cambie hostel in Gastown, thinking that an historic hostel might be a fun new experience, but I cancelled that booking the day before leaving when I realized that my cold would make communal living much less fun for everyone involved… so, I booked a hotel room instead. I was so glad to have a quiet sanctuary at the Ramada in which to rest, watch HGTV, and blow my nose with reckless abandon.

Soon after checking in I took a photo out the window of my room, and minutes later Taemin posted a photo where he is standing with the same landmark in the background, so I definitely fangirled.

The morning of the concert, Feb 6, I did a little bit of exploring in downtown Vancouver, stopping at the Paper Hound bookshop as well as a couple of fabric stores.

Finally I headed out toward the venue, Rogers Arena, and met up with some lovely new Shawol friends! A couple of them were women I had been talking to online for a while (Yo, Court and Gabby!), and several more were people that joined up just because they saw we were Shawol- I love our big Shawol family! I met so many lovely, friendly people.

One of the Shawol I hung out with was Kiki from YoursTrulyDance- check out this talented group on YouTube! Here is their Jopping cover:

We chilled for a few hours before the show started, getting cheap eats at Costco and geeking out. When we made our way into the arena we had to separate into our different seats, but I was so happy to find that I was sitting next to another Shawol named Katie! Her ult is Key, too! After a couple of minutes someone approached Katie and said “Wow are you Katie!?” and I was like, Katie are you a YouTuber? Yup, she is! She does lots of cool unboxing videos, kpop hauls, and stuff like that. Glad to meet you Katie!

We sat in anticipation as the arena filled up around us. Our seats were directly in front of one of the catwalks.

And then, it started!

The concert was really awesome, with solo and group performances, lazers, streamers, and cannons. Surprisingly, we were allowed to film with our phones, and I got some great videos of Taemin!

Sadly, I thought I got all of Jopping on camera but in the last 15 seconds of the song I realized that I hadn’t hit the record button T-T .

There was also a very tense moment when Kai tossed his frisbee directly toward me and it landed on my feet, but I had been looking in Taemin’s direction so I didn’t notice at first and two girls in front of me whirled upon me and began scrabbling at my feet for the frisbee! Katie and I exchanged glances like “holy crap” and the frisbee was snatched from where I’d clamped it between my two shoes. Oh well…

And so quickly, it was over (2 fast, you might say) and some of us met up again in front of the Costco to freak out together and get some food down the street.

Just like when I saw SHINee in Toronto in 2017, the concert was amazing but the experience was especially wonderful because of all of the new friends I met. Thank you for making me feel welcomed in Vancouver!

I hope SuperM enjoyed their time in Canada. Mark is from Vancouver, so it was heartwarming to see how genuinely happy he was to return to Vancouver for a concert.

Thanks Taemin and SuperM for coming to Canada!

Mwah!
New lino cut 🍍
🖤
Interpretive dance, idk
My bestie @thornton.mikey created that black floral shirt himself. Talent! ✨
Listen to that sweet, cracking thunder and lightning, and the gloriously cool rain that comes with it 😌 finally

Mwah!
New lino cut 🍍
🖤
Interpretive dance, idk
My bestie @thornton.mikey created that black floral shirt himself. Talent! ✨
Listen to that sweet, cracking thunder and lightning, and the gloriously cool rain that comes with it 😌 finally
%d bloggers like this: